On Saturday we were surrounded by fog on our journey offshore. Eventually we broke through to some better visibility as searching continued. Our attempts of checking out a minke whale failed as it was rarely surfacing. With more, and even a bit more, searching there was a blow. One of the second largest animals on earth was nearby. Turned out two fin whales were in the area but we stuck with one as we watched this massive mammal move through the water.

Sunday started off much brighter on land. But whales aren't on land and what's important are the conditions occurring offshore. Just before departing Rye Harbor a fog bank rolled in. In our optimistic ways we thought, no worries, this fog is likely just passing through. Nope. Not even close. We found ourselves surrounded by fog for a long time, even worse than Saturday! We briefly saw a minke whale only a few miles offshore and even got some great looks at an ocean sunfish.

As we pressed on we searched areas where whales have recently been spending time. Sighting conditions were working against us but we were far from giving up hope. After a few other stops to search, the weather finally turned in our favor and visibility improved drastically. We redirected our search pattern and soon saw a spout, two spouts! A pair of fin whales were working the area.

Shearwaters and Northern Fulmars (birds) were soaring close by as we checked out these baleen whales. The day ended with one more sighting of toothed-whales to be exact! A pod of ~30 Common dolphins, including a few calves, were zipping around. More shearwaters and fulmars were circling overhead as this pod veered back and forth around the boat. 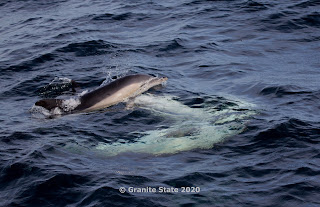