Monday morning the trip began with a bit of a ruckus at the surface as a blue shark was feverishly chasing after a small fish. It was so focused with its task at hand, it wasn't drastically bothered by us nearby.

We then got fin-tastic looks at a large fin whale. My last sighting of a fin whale was August 1. A whole month these whales have been eluding us. What a welcomed-back sight!

On Tuesday, just before getting to Jeffreys Ledge, we came across humpback whales Valley and her 2020 calf. Valley herself was spending most of her time below the waterline while her calf remained at the surface. A few times Valley's calf would lazily roll on its side.

On our travels home we ended up crossing paths with a pod of Atlantic white-sided dolphins. This tight-knit group spent the majority of the time so close to us. So many great looks at some of the calves in this nursery pod.

We found ourselves in a lumpy ocean on Wednesday from leftover energy the wind had created the day before. Thanks to our intern Nicole who spotted Owl the humpback whale as we ventured offshore. Owl was circling around and created a few bubble clouds. Even a minke whale popped up while in the area. Owl is one of Blue Ocean Society's adoptable whales and always an enjoyable whale to see spending time in the Jeffreys Ledge region. 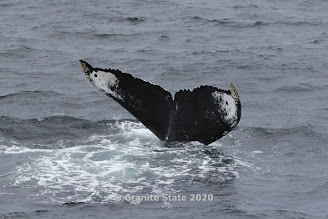