During both trips on Monday we saw three different types of whales: minke whale, humpback whale and fin whale! In total, on our morning trip, we saw six minke whales, four fin whales and Zorro the humpback whale.
Our fin whales were spending a long time under the surface, mainly just cruising through the area, but one of our whales was Comet!
While we have seen Comet a few times this season this whale hasn't been around recently, so it was a great treat to see Comet back in our area. Zorro was creating a few bubble clouds and circling around the area.
In the afternoon we got a quick look at a minke whale before finding Comet once again. But this time, Comet was over six miles to the south of where it was in the morning and heading in a completely different direction! On the move once again!
We ended the day with Zorro actively lunging through the water watching fish desperately escape from being lunch!
Tuesday provided another incredible day for watching wildlife. In the morning the ocean was so calm, and the variety plentiful, sightings were numerous. We saw four minke whales, a basking shark, humpback whales Nike and Patches, a blue shark, a few harbor seals and two ocean sunfish.
The humpback whales were on the hungry side making lots of bubble clouds and lunging through the water!
The sea breeze briefly picked up during our afternoon trip but wildlife was still plentiful. We saw two fin whales and three humpback whales: Patches, Nike and Zorro.
We ran only a single trip on Wednesday continuing to see so much wildlife the Gulf of Maine has to offer. In total, we saw six minke whales, four fin whales, a shark, an ocean sunfish and Nike the humpback whale. A few of our fin whales were being sleuth-y but that was okay when a pair we were watching suddenly turned into a trio of the second largest animals on earth!
Minke whales popped up all along our travels and even when we were headed to a recent whale report, a humpback whale sprung clear out of the water nearby!
Nike breached a few times in the distance before lobtailing and then acting as if nothing had ever happened. You never know what might occur, but if you are looking in the right place at the right time anything is possible 😊 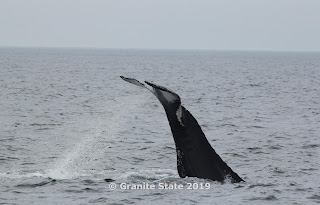