Today was definitely a great way to beat the heat. With temperatures rising, and hazy and humid conditions sticking around, we couldn't think of a better way to stay cooler, than heading offshore in search of whales. This morning we started just a few miles away from the Isles of Shoals when a passenger noted lots of splashing of our port side. It turned out to be a very nice pod of Atlantic white sided dolphins. There were about 30-40 of them and it was such a nice way to start our trip. 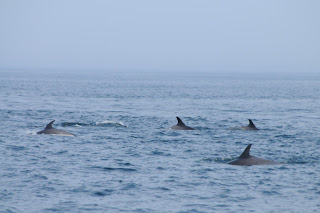 After spending a little bit of time with them, we decided to continue offshore in search of other whale activity. We received a report of large whale activity from an offshore fishing vessel with a location about 6 miles away and decided to head to that area. When we were about 2 miles away from the reported activity, we saw not one, but 2 tall exhalations off our left side and both were relatively close to us. They turned out to be 2 adult Fin whales. They were not associated with each other, meaning they were not swimming together. They were traveling in different directions and we decided to stay with the first fin whale we came upon. While watching this fin whale we had a couple of Minke whales move through the area as well. It gave all our passengers an idea of the size difference between the two species! 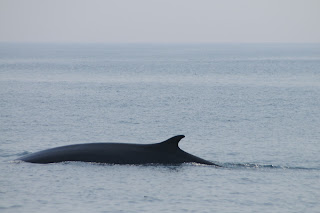 While we still had time to do more exploring, we continued on our way to a deep water area where other whales had been seen the day before. Of course whales are wild animals and they are moving around constantly searching for food, but we decided to try our luck, and I'm sure glad we did. We ended up finding 4 different Humpback whales. First we spent time with 2 of them and it turned out it was an adult female with her new calf! It's been a few weeks since Clamp and her calf have been seen and it was great to see them once again. 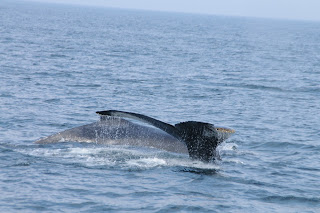 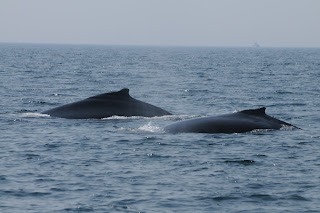 We also spent time with an unknown whale in the area. This particular whale seemed to be getting a little rest and never fluked for us to see who it was. We did get good photographs of the dorsal fin, but we are still in the process of trying to identify this whale. 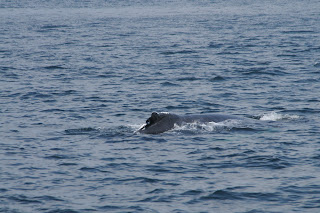 We ended our trip with a fourth individual in the area. This large adult turned out to be an adult female named Valley. She does not have a calf with her this year, but has brought calves to Jeffrey's Ledge in the past. We haven't seen her on the ledge since May 26th and it was so nice to see her again. As we headed back to Rye, we were anxious to head back offshore to see who else may be waiting for us. 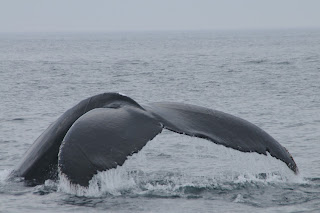 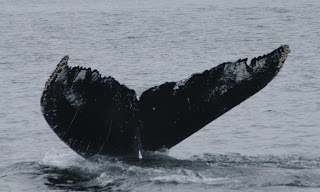 We boarded the boat for our afternoon trip and as we headed out of the harbor, there was a slight shift in the wind direction and the wind speed started to increase. We continued on towards the area we were in during the morning, but the wind did not let up. Due to the direction we had to travel to get to the whales and the direction of the wind, we were taking some spray on board the boat. we had warned our passengers that this may happen, and we were thankful that it was a warm day, because some people got a little wet while we travelled to the whales.

We stopped about 5 miles short of where we were in the morning to get looks at an adult fin whale. One of our crew member had seen it off our port side, so we decided to try our luck. Unfortunately that whale had traveling on its mind where we only saw it surface one time, then it disappeared. Our passengers were definite troopers as we continued off shore. As we travelled we got a report from our friends on the Atlantic Queen that they had some whales close to the area where we were in the morning. As we approached the area, there were several whales around and they seemed to be all traveling in different directions. We decided to start with a couple of humpback whales that we saw surface close by. As we were waiting for one of them to resurface, one of them stunned everyone, by breaching off our right side! What a sight to see!! After that spectacular display, we were waiting for it to resurface when a Fin whale surfaced right off our left side. This whale was surfing down the swell and we spent quality time with this whale. 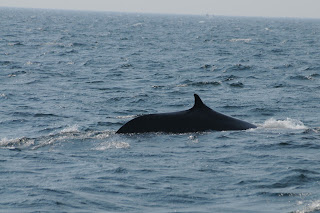 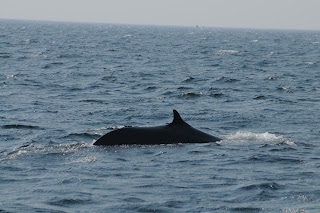 The more time we spent in the area, the more whales we saw. In total, we had 5 Humpback whales, 1 Fin whale, and 1 Minke whale all within about 2 miles of each other!! Before we ran out of time, we tried to get some looks at a different humpback whale in hopes of getting an ID on at least one of animals of the afternoon. This whale surfaced for a couple of breathes and then started to arch it's back to go on a deeper dive. We were still taking on a little spray and I didn't want my camera to get wet, so I closed the window and hoped for the best. We were able to identify this whale as an adult male named Wy!! This whale was first seen in 1980 and it's the first time this whale has returned to Jeffrey's Ledege this season!! Welcome back Wy! 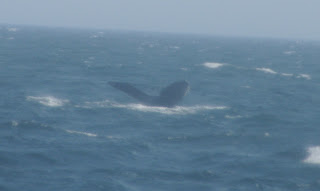 As we turned and headed for Rye harbor, Wy treated our passengers to a head breach and it was a great way to end our trip.  Today was full of surprises for both the whales and weather, and I want to thank all our passengers for joining us.  Even though folks in the afternoon may have gotten a little wet, you were all great sports and I thank you for that!
Posted by Beth Bentley - BOS Research Associate - Granite State Whale Watch Naturalist at 1:02 PM