The weather throughout the day was simply perfect. Blue skies and light winds made for ideal whale watching conditions that lasted all day. In the morning we started with a very nice Minke whale that swam right beside the boat several times. 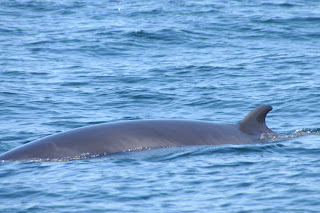 As we moved offshore in search of other Minke whales as well as other species, we searched for quite some time. Sometimes patience is a virtue when searching for whales where they are constantly looking for food in many different places throughout Jeffrey's Ledge. We got a radio call from an offshore fishing vessel that said they had seen whales just swim through their area and we were only 4 miles away from that location. I updated the passengers that we were going to change direction and we headed to a northern part of the Ledge. As we approached the area the anticipation was building for everyone on board. Then, we spotted not 1, but 2 exhalations from 2 adult Fin whales. As we approached these whales, they were swimming in different directions, but we were able to spend time with both of them. 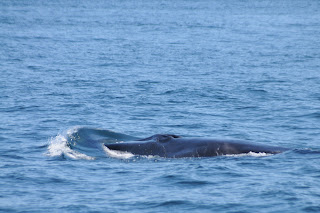 When we approached the second Fin whale, we noticed lots of splashing near it, and soon realized that we had another species. The fin whale was being escorted by Atlantic white sided dolphins! The dolphins were escorting the fin whale in a manner that's similar to them bow riding a boat. Fin whales are known as the greyhound of the sea and can reach bursts of speed reaching over 20 mph, and the dolphins will use that speed from the fin whale to help them swim more efficiently. 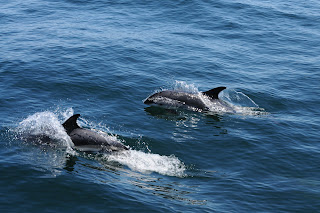 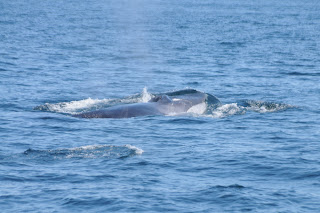 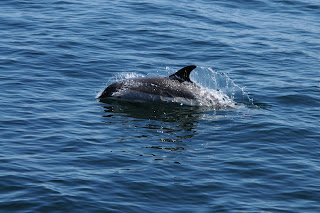 As we turned for home, we saw a different whale exhale not to far from where we were, so we decided to check it out, but knew we didn't have much time to spend there. It turned out to be an adult Humpback whale named Halfmoon who was born in 1979! What a great way to end our trip and we were looking forward to what the afternoon may have in store. 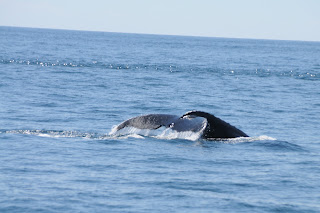 In the afternoon we headed to the same area where we had ended in the morning in hopes that some of the whales may have stayed to feed. Sightings can change in a very short period of time, but we thought we would try our luck again and had good feelings about what might be in store. We travelled for quite awhile and then we spotted a whale exhaling a couple miles closer than where we were in the morning. Once again, one whale turned into 2 and before we knew it we had 2 Fin whales and 5-6 Minke whales around us. We had 2 different fin whales than we had during our morning trip and they stayed along the surface for quite some time, giving all our passengers an idea as to how big they really are. 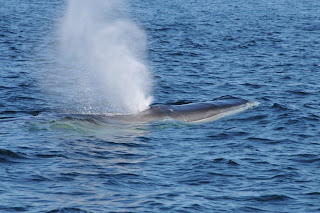 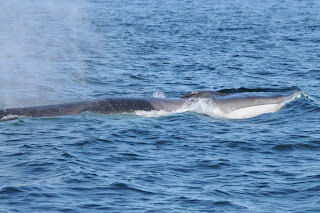 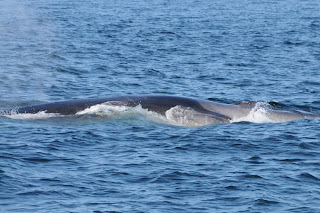 After spending quality time with all the whales we had, we decided to do a little bit more exploring while time allowed and it paid off. Once again, we were able to find Halfmoon the humpback whale. Halfmoon was creating several bubble coulds to help corral food deep underneath the water's surface. It was a very nice way to end our afternoon trip and the day as a whole. 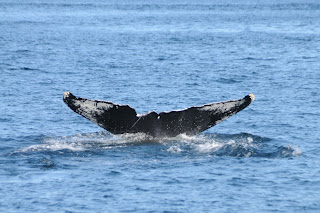 A big thank you to all our passengers who joined us today. Even though the whales took us further offshore than planned, they did not disappoint. The weather is continuing to look nice into the upcoming weekend and we hope you will join us for an outdoor adventure.


Keep in touch! Become a Fan on Facebook || Follow Us On Twitter
Posted by Beth Bentley - BOS Research Associate - Granite State Whale Watch Naturalist at 11:47 AM