This morning we were out in search of whales and birds as we were joined by our friends from the Seacoast Chapter of New Hampshire Audubon.  Lots of Wilson's Storm Petrels were seen, a few Shearwaters, and a couple of Northern Gannets were picturesque against the calm ocean conditions today.  As for the whales they were equally enjoyable.  Our first stop was on a pod of 40 Atlantic white-sided dolphins.  These whales were creating quite the ruckus splashing, and sometimes soaring, through the water!
A special treat to start the day as we were even more lucky as we passed another small group (around 10-12) before even getting to Jeffreys Ledge.


We also got a chance to take a quick look at a Blue shark before it realized a large boat was "creeping up" towards it.  We love trying to sneak up on sharks as usually as soon as they realize we are close, with a couple swishes of their tails they swim down into the depths of the ocean.

Once on the Ledge we came upon another species.  It was a Humpback whale.  This animal's dorsal fin looked familiar but it wasn't until it went on a deeper dive did we realize exactly who it was.  Another addition for the 2012 season.  Welcome back to Jeffreys Ledge Patches!  As seems to be the case recently, we found another visitor that has once again made itself known to us here on the Ledge. 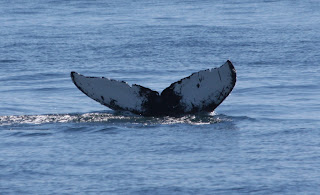 This afternoon we heard reports from our friends on a few of the other whale watching boats of a Fin whale inshore of Jeffreys Ledge.  We decided to head that way, only to get side-tracked for a bit when we came across a few very cooperative Harbor porpoise (many times we never even stop to try to take a look at these whales as they are EXTREMELY skittish around boats!) and our familiar lack-of-dorsal fin Minke whale.  We spent some time with both of these species before continuing on.  Once in the area we waited, and waited, and our passengers may have started to think we were waiting for nothing when suddenly a spout was seen out in the distance.  The Fin whale was still nearby.  One look at this whale and we all smiled to see that Ladder was once again in our area!
We got some very nice looks at this whale before pressing on to explore a bit more before heading for home.  As we traveled along, out in the distance we saw a spout.  By the time we made our way into the area we realized there were two spouts.  Two more Fin whales were in the area.  These two whales were swimming along together and being such the massive creatures they are, we got some incredible looks as they swam in synchrony around the area.  We were even able to identify one of the whales as #0837, a whale first sighted on Jeffreys Ledge in 2008 and a whale that has also been seen already this season on the Ledge.
Before heading home we even got the chance to see another Minke whale and even another Fin whale swim in towards the area from further offshore.  An extremely nice way to end the trip being surrounded by multiple species.