The wind and waves certainly made for an adventurous day on the ocean!  But in just over an hour from leaving the harbor, we found whales! Three humpback whales were spotted although only one consistently came up near the boat. This one was named Shuffleboard! We got great looks as she was staying in the same area for multiple dives. 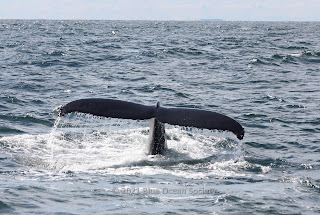 Heading back to the same area we found whales on Wednesday, we were happy to find a trio of humpback whales named Nile, Valley and Gunslinger. These three were slowly traveling and sometimes even high-fluking! Beautiful sight.

A fourth humpback was in the area. This turned out to be Mogul! He was blowing clouds of bubbles to concentrate his prey, and even showed us the remnants of his digested fish! Whale poop!