Boy oh boy was the ocean clam as calm could be today.  Almost the entire day we were treated to very calm seas and minimal breezes.  It was truly an enjoyable sight.  Add in our whales and it was another great day on Jeffreys Ledge!

This morning we first started with a couple of Minke whales.  Turns out these two animals in the area would be the start to the 7 we saw throughout our travels of the morning.
With some nice looks we were off to the Ledge and hopefully more whale sighting.  Our next sightings of the morning time was one of the 3 Fin whales we saw in the area.  This whale was easy to identify... it was Fjord.  Not only have we been seeing this whale for a few days now, this whale's dorsal fin is so unique that with just a quick glance we smile knowing a familiar "friend" is in our mists.
One of the other Fin whales in the area ended up just alongside Fjord at one point.  As quickly as this whale had moved in near Fjord, the two whales seemed to join up for a brief moment, and then just as quickly part ways.  It was an interesting sight to see as we watched the two whales maneuver in towards each other, synchronize their surfaces for only 3 breaths, and then back off in completely different directions.  Interesting how we are always intrigued to see the interactions between some of the largest creatures on this planet.

We left the Fin whales behind and saw out in the distance a different species.  With such incredible ocean conditions we ended up making our way to another whale a few miles away.  It was Halfmoon the Humpback whale.
Halfmoon was circling the area, spending only a few minutes underwater, and even blew a few bubble clouds, allowing for some some great looks at this animal.
With a bit more time we decided to venture off to search for more marine life.  Turns out our next sighting wasn't even a whale.  As we moved over Jeffreys Ledge we ended up "sneaking" up on a dorsal fin... it was a Basking shark!  The tip of this large shark's fin was breaking the surface and by slowly coming into the area, the shark just continued to swim just below the water's surface and we got a chance to check out this fish!
Our afternoon trip also started with a couple of Minke whales.  These two animals were staying confined to a particular area of ocean as we soon realized not only the whales, but the birds in the area, were all trying to catch some food.
We had one Minke whale lunge through the water just off the pulpit, extending its pleats on its lower jaw maximizing the amount of food, and consequently salt water, inside its mouth!  While the whale was trying to munch up all the fish, the seagulls were attempting to do the same as life from the sky and sea were attempting to catch as much as possible.

As we continued around Jeffreys Ledge we saw a few blows in the distance and decided to first check out a Fin whale.  This animal was all over the place!  Only coming up for maximum 2 breaths before diving under the surface, this whale was on a mission.  Luckily it wasn't moving great distances in between dives so we got some nice looks at this very quick moving animal this afternoon.
Next we got to spend some time with yet another species of whale.  This time it was a pair of Humpback whales.  It was Pinball and her calf.  When we first approached this mother and calf pair we got the chance to watch both of them sleeping on the surface.
These two were suspended right on the surface and got the chance to float right alongside them as all three of us (Pinball, her calf, and the boat) sat there floating in the mid-afternoon sun.  After eventually waking up the two circled around as Mom did a bit of feeding, creating bubble clouds, while the calf kept swimming to catch up to wherever mom was moving to.
If only the weather, and the whales, were like this everyday... Alas, we get to enjoy the unexpectedness of it all: the weather, the whales, and the pure excitement of the unknown each and every time we go whale watching.  And that is the best part. 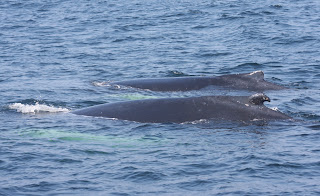