Active Animals on Jeffreys: May 19th

The weather, and the whales, were on our side today. A very calm ocean and miles of visibility made just being out on the boat an enjoyable time.  Add in our whale sightings and you've got yourself one great Saturday. Our first animal of the day was Obsidian the Humpback whale.  This particular whale was first sighted in 1976, making Obsidian at least 36 years old!
Obsidian remained swimming slowly around so we were able to get some nice looks at such an old whale before continuing on to some other spouts in the distance.  One spout turned into two, then three, and then SPLASH; a breach!  Then another!  Then a few minutes of quiet, then more splashing!  We were heading to all the activity when SPLASH again in another direction!  We came into an area where we had 2 mother/calf Humpback whale pairs being quite active.  On one side of the boat there was constant flipper slapping and tail breaching from one of the pairs, while on the other side of the boat a calf started to continually jump out of the water.  Giant white flippers were constantly above the water off our right side and off our left side we kept seeing an air-borne whale.  Where to look!

The pair that we ended up spending the majority of our time with was a mother very well known to Jeffreys Ledge.  It was Clamp and her calf born just this past winter.
We got a chance to see Clamp last year during one of our 2011 whale watches though little did we know she was pregnant with such the "showcaser" today!
Turns out both Clamp and her calf breached for us but it was the calf who also did multiple head breaches, tail breaches, and showcased just about every portion of its body above the water.

With so much excitement going on so close by it was difficult, even for a moment, to take a glimpse out in any other direction around the boat as even more Humpback whales were nearby.  However, it wasn't just Humpback whales today.  There were also Minke whales surfacing, a couple of Fin whales around, and even a large Basking shark utilizing this portion of Jeffreys Ledge today.


Whales, weather, and wonderful sightings were the words of the day.  Now to just wait for tomorrow and see what the whales may have in store for us back out on the Ledge. 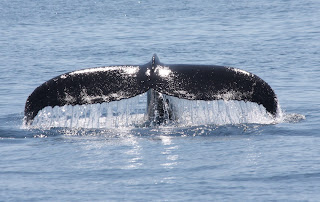