This morning the fog was pretty heavy as we prepared the Granite State for the whale watch. Fortunately, the wind blew the fog away before we departed! We found a pod of over 200 Atlantic white sided dolphins! These small "toothed whales" were everywhere, giving us all great looks. 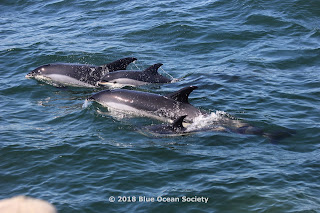 Then we found a humpback whale named Hornbill who was near another whale that we couldn't get close enough to to identify. Hornbill was staying down for a while, and in the mean time we saw a couple of minke whales as we waited.
Yet another humpback was around but also not all that cooperative...wild animals.....what shall we do.....  But then we found a pair of humpback whales who were spending a lot of time at the surface.  Pinball, a humpback whale born in 1989 was hanging out with the 8 year old Pleats.

Great looks at both, and a harbor seal before heading home.

This afternoon, we found a small pod of Atlantic white sided dolphins just after seeing a handful of harbor porpoises. 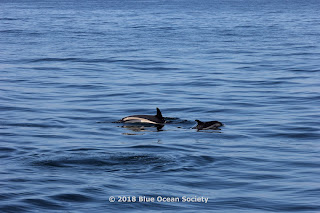 Continuing on, we found 2 pairs of humpback whales. Bounce and Diablo were blowing bubbles to catch their prey, while Pinball and Pleats were not too far away.

Harbor porpoises and more harbor seals were spotted briefly during both trips!
Posted by Dianna Schulte, Blue Ocean Society Research Coordinator at 12:50 AM